Since co-founding PreviousNext in 2009 with Kim Pepper, our company has put a lot of focus into supporting the Drupal open source project and community at a regional and global level.

This has included a number of key initiatives, including:

This support plays a key role in PreviousNext’s ability to attract and retain the best Drupal talent, facilitates trusted relationships with key members of the global Drupal community and maintains our reputation as Drupal experts in the eyes of prospective clients. In other words, strong support for Drupal pays dividends to maintain PreviousNext as a sustainable company.

After a decade of leading PreviousNext myself, long-term colleague Jason Coghlan took the reins as Managing Director in late 2018. Jason is responsible for all of PreviousNext’s operations and client engagements, which he manages in concert with our internal Leadership and Delivery teams. My ongoing role is to guide PreviousNext’s strategy, marketing and finances as Chair of our Executive Team, paired with enhanced engagement with the Drupal community.

The first initiative I’ve focused on in 2019 has been the formation of the DrupalSouth Steering Committee. DrupalSouth has been running as an annual conference in Australia and New Zealand since 2008 but had always been reliant on ad-hoc volunteers to take on the significant work to organise and run each event. The Steering Committee’s objective is to provide ongoing consistency for the annual conference whilst spearheading other initiatives that support and grow Drupal’s community and commercial ecosystem in the region. We’ll be presenting our initial ideas at DrupalSouth in Hobart in late November.

I’m also honoured to have been appointed to the global Drupal Association Board of Directors and just returned from my first board retreat before DrupalCon Amsterdam. The board works alongside the new Drupal Association Executive Director, Heather Rocker, on overall strategy and direction for her team of almost 20 staff to implement. I’ve been asked to chair the board’s Revenue Committee that oversees how the DA is funded through event attendance, sponsorships and other sources, and to sit on the Strategic Planning Committee that will define where the association's focus can be best directed. My initial term will run until 2022 with a frequent presence at DrupalCon North America and Europe in coming years. 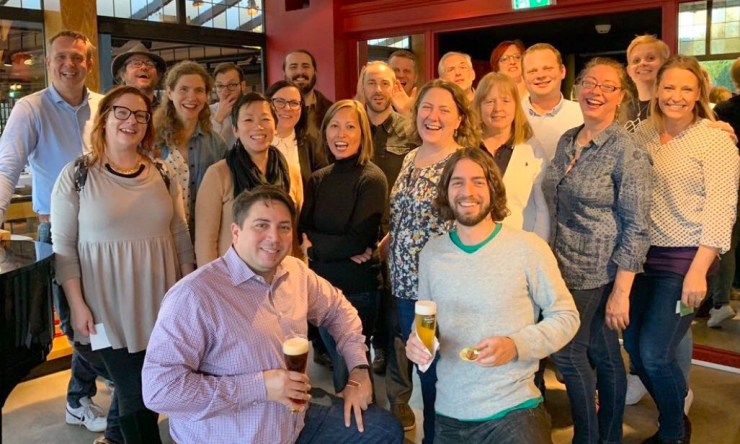 Whilst in Amsterdam, I also sat in on round table discussions with other local Drupal associations from around the world, sharing ideas about how we can scale community engagement whilst leveraging common approaches and resources. A Supporting Partners round table focused more on the needs of Drupal services vendors and large users and a CEO dinner was a great insight into the state of Drupal businesses around the world. It was inspiring to see how professionally organised the global Splash Awards were and to understand how we might bring the initiative to our local region to recognise world-class projects being developed here. To cap things off, I had a talk accepted where I could share some of PreviousNext's experience winning and retaining long term clients - essentially all the things I wish someone had told me a decade ago!

With the upcoming release of Drupal 9 in mid 2020 there’s a high degree of optimism and confidence around Drupal’s immediate future. The software is a clear choice for enterprise and large organisations, Drupal services businesses are doing well and there’s a huge number of fresh and enthusiastic members of our community. While there’s some clear challenges ahead, I’m excited to be able to play a role in helping solve them at a global and regional level.

If you ever want to connect with me to discuss how I can help with your own Drupal community or business initiatives, feel free to get in touch via Drupal.org or Drupal Slack.