At PreviousNext we rely heavily on vagrant for development environments and phing for performing automated tasks to speed up site building and project development. These tools are hugely beneficial in the long run. In this blog we'll have a look at how we as drupal core developers can automate the tedious tasks like site install/ re-install, testing, coding standards validation and enable modules.

nick_schuch has created a repo "Vagrant Drupal 8 on github.

To install and use this is very simple. You can either go through the README.md or read further.

Install vagrant (1.3 to 1.5) and Virtualbox (4.3.6). After installing vagrant install vagrant plugins: (all latest version of these will work just fine.)

Or open vd8 directory in phpstorm as a project. 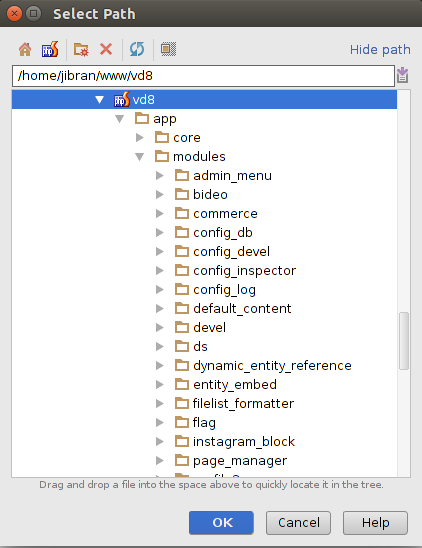 Or in phpstorm VCS → Checkout from Version Control → Git

After the clone completion select no when PHPStorm will prompt to open app dir as project.

Open build.xml in the editor or select it in the Project tool window, and then choose Add as Phing build file on the context menu of the selection.

It'll show you the phing build window and double click on install command. After the install open http://d8.dev/ login using username: admin with password: password. You can reinstall drupal using phing reinstall command or by double clicking the reinstall in phing build window. As a contrib developer it is a real pain to install contrib modules after install or reinstall but now you can automate that process as well without writing new profile. Create a build.properties files in vd8 root. Add following lines to the file

You can also check the coding standard of your code by using phpcs:dir command. This command will prompt you the directory path you can add path relative to app directory.

If you want to add new command to phing build task please create an issue or submit a PR for vd8 repository. Please leave a comment below to share you experience.

PS: If you are going to use this on ubuntu then please look at https://github.com/nickschuch/vd8/issues/13

Fixed. Thanks for pointing that out.

Thanks, this is great! Still getting used to IDEs after years of VIM :D

Also a little confused as to the install vs reinstall - the reinstall has the commands for creating the files directory and copying the settings.php/services.yml so to set it up I need to do reinstall.

Lerman, it is a great post thanks for writing it!

Thanks for the appreciation.

Mostly about OSX + vagrant + phpstorm + vagrant hostsupdater and other plugins...
The tutorial failed for me at the provision-via-phpstorm step because it had "no askpass" and could not mount the /vagrant folder on the guest without admin intervention.
fix here http://apple.stackexchange.com/questions/131385/ssh-askpass-on-mac-os-1…
was necessary for me. Or just doing 'vagrant up' from the cli directly.

Good catch. A similar fix is to configure your system to not ask for a password at all.