A new world university built on social justice, sustainability, creativity and collective effort, Charles Darwin University is committed to bringing people together to use knowledge to shape the future and has more than 24,000 students spread across 11 campuses and centres in the Northern Territory, Melbourne, Sydney and online. In September 2017, Charles Darwin University engaged PreviousNext for the redesign and Drupal 8 development of their existing website. 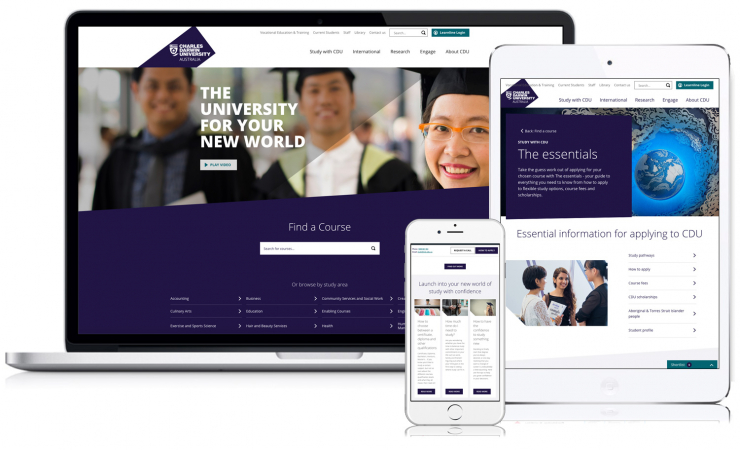 The previous Charles Darwin University (CDU) website launched in 2011, built on a Drupal 7 platform.  Over time however, a need emerged for the entire structure, design and guiding principles of the CDU website to be realigned. The architecture, design and functionality of the original site no longer met the needs of the university’s internal and external users and no longer reflected their emerging strategy, brand values and priorities.

With the commencement of the project, workshops were conducted both on campus and in Sydney during the discovery phase in order to identify the key user personas. PreviousNext then conducted user testing across Australia to get feedback on the new designs that were in flight at the time, using this research as a platform from which we could adjust designs accordingly.

The comprehensive discovery phase resulted in a well defined product vision and UX strategy that could be used as a solid guide as we moved into the build phase of the project. Utilising the Agile framework, the PreviousNext team collaborated closely with the Charles Darwin team, working in 2 week sprints to power through the backlog of work. Regular sprint reviews gave CDU the opportunity to test and provide feedback throughout the development phase.

A new Homepage and “Study with CDU” section for the Charles Darwin University website was launched in February 2018, with pages that were built entirely with a newly-developed library of Drupal components in Drupal 8. The new library of components made available to CDU allows internal content editors to now build custom pages across the website by selecting the component(s) of their choice. PreviousNext continues to work with Charles Darwin University, with further developments to their site planned for the future.